I think it happens to every woman. Here and there, pieces of who we are, good pieces, at that, begin to crumble at our feet. The sources of that quiet, subtle destruction are many. Discouragement, lack of confidence, heartbreak, loss, pain, unhappiness–so, so many things. Womanhood is hard. If you’re a woman, you know what I’m talking about. We struggle. We weep. We bleed. Of course, this is the human experience, isn’t it? Every human being endures. Every human being has to fight to hold on. Sometimes I do wonder if there seems to be an extra layer of things to fight for when you’re a woman. Maybe our emotions get the best of us. Maybe it’s biological. I don’t know.

2017 was an interesting year of womanhood for me. Instead of going into the specifics of that journey and all the things I experienced, I want to talk about what I learned and continue to learn from those experiences, as we’re only weeks into 2018 and a new year doesn’t necessarily mean a ton of changes have been irrevocably made. Here are three things I now know for sure.

Protect your heart. A friend once gave me this piece of advice. The heart has many chambers, he said. Know which ones to open and which ones to keep closed.  It’s important to protect both your heart and the energy around it. Because people are powerful. Sometimes we open a chamber without really wanting to, only because we’ve been stupefied and transfixed into action. Know the people around you. Resist them if you need to. Let them in only if they deserve to be there. (I don’t diminish the excitement that comes from meeting someone who seems like they’ll be good for your heart. Maybe they are. Maybe not. Exercise caution.) There were times in 2017 that I didn’t listen to my intuition. That I forced feelings that, deep down, weren’t there. It’s all related to the heart. Protect it however you can. It doesn’t need a suit of armor, but it needs a lock and key.

Protect your ‘no.’ One of the most brilliant, thought-provoking statements I’ve ever heard is the following: No is a complete sentence. It fell by the wayside for me a bit in 2017, this ability to say no and mean it and allow that to be a viable answer. Sometimes I said yes when I didn’t want to. Sometimes I found myself qualifying my no. I’m getting back to protecting my adult right to choose if I’m going to do something or not. You may be accused of not wanting to try new things, of being scared, of not being open-minded. Sure. But determine those things for yourself, dear reader. I’m all for suggestions, but I’m also all for honoring the rights of others, myself included.

Protect your you. Ever mess up royally, just full of mistakes, and then start to call your own self every objectionable thing in the book? It’s intense. It’s not beating yourself up. It’s beating yourself up and then some. You become every villain, every ounce of ineptitude, every horrible thing. Look. 2017 was hard, you guys. I found myself going about 600 paces back when it came to my personal insistence on building myself up. It was very much the opposite: there were times when I verbally and mentally pushed myself so far down…it was just incredible. Protect your you. It’s a bit trite and treacly to say, but I’m saying it anyway: the value you bring to anything is immeasurable. Even if something implodes, you were part of it. Just whatever you do, especially as a woman: hold on to your value. There are things other say, and then there’s what you say about yourself. Protect that power.

I’m continuing to take 2018 one day at a time. Let’s hope there aren’t too many pieces of me left on the ground as I make my way. You, too. 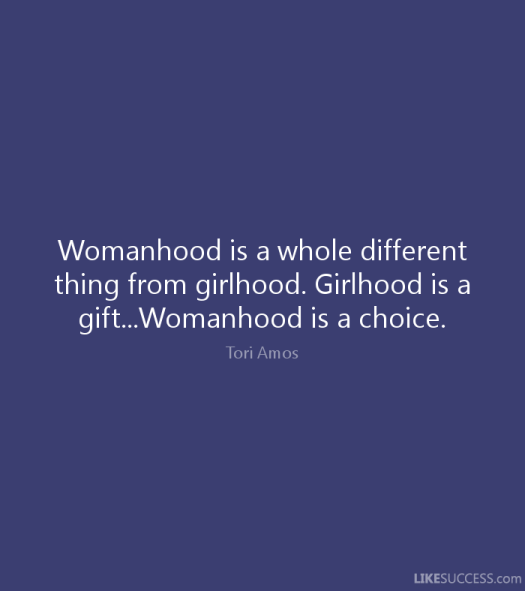 [The post title is a lyric from Tori Amos’ amazing song, Winter. All about growing up, choices, leaving the fairy tales behind. Appropriate for our discussion, no?]