Because there was just so much to capture, so much to do, so much to see, and so many joints to rub with Aspercreme after traipsing around the city to keep up with regular blog updating during the trip. (On the latter statement, I used my trust Fitness app and my calculator: we walked a complete total of 56,065 steps, from when we arrived in Paris to when we departed.) By no means an obnoxious complaint, of course, and pardon the obnoxity (not a word). We just packed in so much in those eight days in the City of Lights that by the end of the day, when WiFi did its job, I sat on the sofa like a zombie and eyed my sleep mask more than my WordPress app.

We arrived back in the US of A last Thursday, which was Friday, France time, which meant that the jet lag I suffered after my Germany/England trip was going to visit me, Parisian style. But other than waking up on Friday with aches on body parts I didn’t even know I had, I was able to eventually come back to normal. Back to work, back to supervisors that confuse administrative staff for babysitters, back to life. But, again, no complaints. As one of my travel buddies and good friends astutely put it during our trip, “we work so we can travel.” Many more photos will come as the week and the month wears on. I took many for me, which means there were many for you, dear reader. Below, however, are a few things I learned, some travel tips, etc.

Pinterest Travel really is a thing. If you don’t already, I welcome all future travelers to start pinning away when they decide where they’re going. Yes, we pin things that will never happen in reality (or maybe just me? See my recipes and home decor boards), but it’s worth making actual travel plans by pin. The three of us happened to do this on our own and were able to have a list of places we wanted to visit, restaurants we wanted to stuff our faces in, etc. Images of Paris that I’ve gazed at for months and months came roaring back to me, reminding of all the places I wanted to go that I didn’t have a chance to visit the first time I visited the city twelve years ago. So, yeah, create them boards, y’all. They will come in handy.

English may not be the evil that shall not be named after all. The last time I visited France, I was with French speakers. They did all the communicating for me (see past posts on the ineffectual nature of my brain and the French language), for one thing, which made things cushy and great. But I certainly wasn’t blind to the French side eye the natives cast in my direction when my friends would mention that I was American. Anyway, it’s 2016, people. This time, you had three ladies who spoke very little French (I know my vocab, but conversation? Le crickets). I wondered how we would do, how we would communicate, all the side eye that would come in our direction if we butchered the language, whether people would even give us the time of day (they’re known to not give you the time of day, by the way). It was fine. Once it was established that we were ‘Mericans, most of the people helping us easily switched to English. It was awesome. Didn’t mean that we didn’t try to speak like the natives, but it was nice to recognize that the pressure was off.

Le Metro. I envisioned a lot of Uber rides to our destinations. I just did. When I go to New York, for example, unless I’m with someone who lives there, I avoid the subway like the plague. Cabs and Uber for me. But the advantage of living like two steps away from the metro station where we were (13th arrondisement and about 10-15 minutes outside of Paris) was that we learned how to use the system. And it was awesome. First of all, the French have a pink line, so applause for that on its own. Second, it’s very, very easy to figure out. Grab a Navigo card (valid for a whopping ten years), load it up, grab a map (which has all the touristy sites listed on it) or an app (I loved the Paris Metro app; very handy for creating routes and easily seeing what lines to take), and you’re good to go. We only made use of Uber to Versailles, which would have taken a zillion hours by train, and for those nights when we were gallivanting around the city way past our bedtimes.

Honorable Mentions that I’m sure you know already. 1) It helped to not reside so close to Paris. We were away from the crowds and able to get everywhere by train. If possible, with any city, really, some distance between you and the hotbed is really quite nice. 2) Bring cash. Just better. A credit card in case of emergencies, but cash is just better. Make friends with the ATMs in the area. 3) Use up your coinage. Most banks won’t covert them.

Last but Not Least in Any Way. Pick pockets don’t play. Mind your stuff at all times. There were plenty of occasions when my starry-eyed appraisal of the city kept me from noticing that the opening to my cross-body handbag was behind me rather than in front of me. Don’t be like me. Or, as it also was in my case, have a good friend to quickly remind you to come back to earth and watch your bag.

It was a marvelous. magnificent trip, dear readers. I loved every moment of it. Even the aching joints and the Aspercreme. There’s more to tell and I will tell and I will share. At this point, though, I leave you with a photo I took with my girls during the trip. The smiles say all, n’est-ce pas? 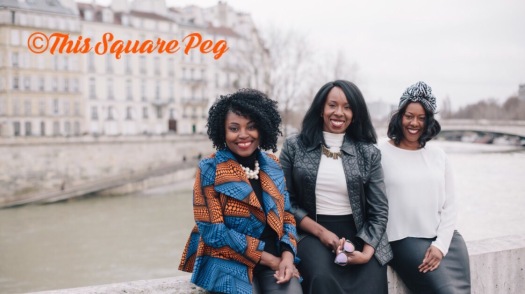